The AirPods is Apple’s definition of wireless audio for the future. As announced during the Sept. 7 keynote with the iPhone 7 and iPhone 7 Plus, which are the first iPhone devices that the headphone jack was eliminated.

Apple has claimed that the future of audio is wireless (or via lightning), thus to prove, Apple has announced the AirPods – wireless earphones with lots of technology, sensors and ideas that are all packed into these pods or buds and the Charging Case that is of a size of a dental floss box.

It was recently in December that Apple has officially made it available for purchase to the general public after 2 months of delays to the AirPods and shipping times quickly became from 2 weeks to 4 weeks and now shipping times are 6 weeks. However, Apple has said that Retail Stores will receive regular shipments of the AirPods over the weeks, but it is unsure for the Apple shops in Singapore.

TIP: Order the AirPods from the Apple Online Store and keep a lookout for stocks in the Apple shops. Immediately cancel your online order after purchasing it. This will reduce your waiting time while hoping to get them at the Apple shops which stocks are limited.

The AirPods are powered by the W1 chip, the technology and the custom built processor driving the AirPods. The W1 chip brings better connection, better battery life and improved sound. The AirPods are also packed with lots of sensors such as voice and motion accelerometer and optical sensors.

External noise via phone or videos calls, or recording is more focused on your voice, which the ‘magic’ is done by the voice accelerometer. The motion accelerometer and optical sensors bring out more tech in it.

Takes a minute to pair, no need for re-pairing for all of my devices.

The AirPods works via Bluetooth only which the AirPods has to be nearby to the device you are using and does not work over the internet or over Wi-Fi. The AirPods also works with Android or other non-Apple devices as well, via Bluetooth with limited features.

The AirPods are packed with features with one of it being the Automatic Ear Detection, found in the Bluetooth settings for the AirPods, is turned on by default and choose to turn off. By turning on, allows it to automatically connect, play or pause when it is in or out of your ears. 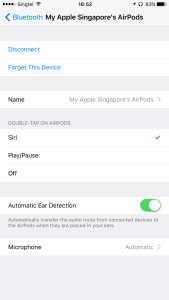 When putting one of the AirPod inside your ears, a sound plays as a signal that it’s already connected to your device(s). A double tap on your AirPods activates Siri and able to change it to Play or Pause when double tap in the Settings for the AirPods.

If you are using it one-sided, the audio does not continue playing when you put it in your ear as it is supposedly in the ‘waiting for you plug in for the other side to start/continue playing mode‘. By using it one-sided, it is suitable for people who drive too. Take one of the sides of the charging case, plug it into your ear and that’s it. It automatically connects to your iPhone. It can be considered as hands-free which there is the microphone for phone calls and double tap to activate Siri, or rather you could say “Hey, Siri!”.

The battery charging case is compact and fits both the AirPods in place. The size of the charging case is roughly half the length of a credit card, placed vertically. Each AirPod size is identical to the EarPod with it being slightly thicker due to the enhanced internals for the technology packed inside it and the battery.

Wearing it for running, the AirPods doesn’t drop out that easily but the feeling of it dropping is present. However, as you wear them more often, the more confident and trust that these AirPods would not fall out that easily unless you are doing an intense workout.

Apple has stated that the battery life is 24 hours per charge to the battery case (and the AirPods). After using the AirPods and keeping them in the case, it charges the AirPods to 100%, so will always have 100% in your AirPods and ready to go! The battery has relatively been good while using them and having to charge the AirPods in about 4-5 hours of usage.

The battery case also has got fast charge and here are the specs:

The AirPods do have a better audio quality than the EarPods but for non-audiophiles, it will be decent enough for casual listening to your favourite music.

However, the AirPods are not noise-cancelling earphones. But it does blocks out a certain amount of noise and brings out the music or sounds. This is could be as a safety measure when being along the streets with the AirPods on and still wary of the surroundings.

Other Wireless Audio that uses the W1 Chip:

The AirPods is packed with the technology of sensors and hours of engineering work into it. Although the sound and audio may not be of a match with other superior wireless headphones and earphones, the AirPods is decent enough and somewhere in the higher average.

The pricing is a rather steep of S$238 or US$159, however as compared to other individual earbuds and earpods without wires, like the Samsung’s Gear IconX, it can comparably be one of the cheapest in the market, but not as compared to other Bluetooth wireless headphones and earphones of the same audio quality at that price range. Most people buying the AirPods, are buying into the technology rather than the audio quality itself. We can only hope Apple would bump up the audio quality and/or bring down the price a little.

One reply on “A week with the AirPods: The Review”

[…] charging your device unless you play music via Bluetooth, like the Apple’s AirPods (See Review & Unboxing of the AirPods) or other Bluetooth headphones, earphones and […]